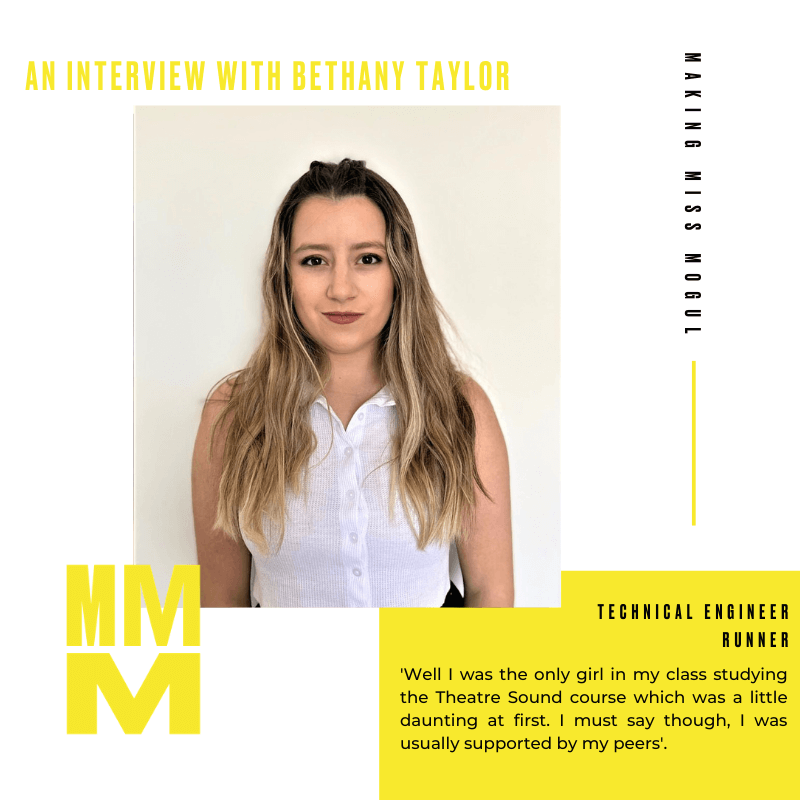 Hi Bethany, thank you for chatting with us today. What is your official job title?

I am currently a technical engineer runner.

What does the job role entail?

Essentially, my role is to problem-solve and keep things running smoothly. A typical day starts at 8am and I begin by checking my emails for any new requests or problems that have arisen. This could be microphone issues, replacing speakers, fixing laptops and other tasks. After lunch, the phone will ring with further requests from clients and I will try to process these requests as efficiently and as smoothly as possible.

What other experience do you have in the technical aspects of the industry?

I began my journey in theatre. After graduating from the Royal Central School of Speech and Drama with a degree in Theatre Sound, I booked my first job for a show called ‘Showstoppers’ in London. Myself and one other person would arrive early at the venue to set up the sound equipment, sort the radio rack, mic-up the band pit etc. This then led to me covering as the number three sound technician for Thriller Live. A runner is on the go all the time helping actors with quick costume-changes and sorting out the in-ear monitors required for big shows like these. I’ve had to swap one of the cast members’ microphones in the middle of a song ready for his big solo which was a lot of pressure!

Who/what inspired you to enter your line of work?

When I was studying for my A-levels, I met a technical assistant called Kate. She shared many stories about her experiences working in theatre. I was fascinated. She definitely influenced me and encouraged me to pursue technical work.

You have worked for many projects, what would be your dream project to work on?

I would say Disney. I have always loved their work and it would be amazing to be a part of it.

Have you faced any obstacles as a woman in your industry?

Well I was the only girl in my class studying the Theatre Sound course which was a little daunting at first. I must say though; I was usually supported by my peers. I have found that as women, we can be our own worst enemies. Sometimes we lack the confidence or begin to feel competitive due to the lack of spaces for female technicians. But on the whole, I have been made to feel very capable by most of my co-workers. I have also seen in a shift in the industry where more women are taking on high-powered roles which is great to witness as a young technical runner.

On that note, would you like to see more women in the industry; particularly behind-the-scenes?

Yes, I would love to see more women in the industry. If I am ever in a position of higher power, I would encourage the women I work with and lift them up! Also, some of the best work I have seen has been edited, directed and produced by women.

What advice would you give to young women eager to become a sound engineer? Are there specific steps to take?

I think it depends whether theatre or television is the aim. For theatre, I would suggest going to university as that is where I gained my skills and knowledge. I would also recommend trying to get into a credible, well-known university as it looks brilliant on your CV. Like a lot of businesses, networking is crucial. It’s not always what you know, it’s who you know! I would suggest sending your CV to local theatres and asking if you can shadow their technical engineer. This is something I did and if you make a good impression, they will most likely ask you back. Television is a little different. I would say to apply for a runner role as this is an effective way to get your foot in the door and you begin to understand how the process works. I would also become a runner in a specific area of interest. For example, if you want to edit, apply for a runner role in post-production. If you want to film, apply for a runner role on the set of a show.

Thank you so much for speaking with us today Bethany, it has been a really informative interview.

No problem. I hope I shed some light on the obstacles for women in the industry, the basics of the job and the steps you can take to become a sound engineer.

As Bethany pointed out, university is a great route for budding technicians. Why not check out the ‘Theatre sound’ course Beth enrolled in at www.cssd.ac.uk

If you liked the sound of a runner role, head over to the National Careers Service website and type in ‘TV or film production runner’. Here, important information such as salary, working hours and necessary grades are all available.

Bethany mentioned work experience as a valuable way into the job. Why not contact your local theatre and send in your CV. Many small, community theatre venues will happily accept CV’s and may even offer you the chance to shadow one of their existing technicians.

If theatre sound is something you are interested in but you have limited knowledge of the job currently, why not purchase tickets to a theatre show for an insight into the world of sound. Check out www.londontheatre.co.uk for show schedules.