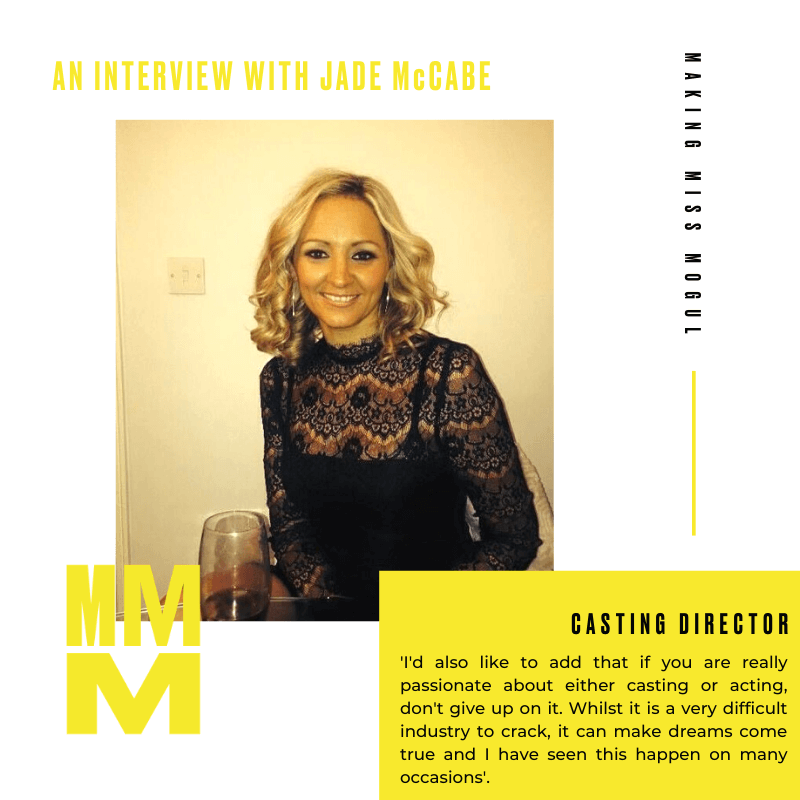 Hi Jade, what is your official job title and what does the role entail?

I am a Casting Director and my role is to organise the auditions/castings for a variety of different TV production companies. These include commercials, corporates and films.

How did you break into the industry?

Are there many women in your side of the industry?

Actually casting directors are mostly female, but there is a mix of male and female CD’s all over the UK.

Speaking of which, have you had to overcome any obstacles as a woman in casting?

Well, there have been a couple of occasions where people have misrepresented their jobs and experience. But, I think that can happen in any industry whether you are male or female.

You have spoken about your past acting experience, does that help with your casting?

I believe that having experience on the other side of the camera helps me so much in castings now. I completely understand what the actors/actresses are going through. I know how they are feeling in the audition process as I have been through it all myself. It helps me cast the right actors for the role because I can look past the nerves.

What advice would you give to a young woman wanting to get into casting?

If you want to do it, go for it! My advice would be to apply to all the casting directors and see if they need any help. You could even start working for an agent first. This would help you to feel comfortable speaking with casting directors on the phone and build relationships with them. I’d also like to add that if you are really passionate about either casting or acting, don’t give up on it. Whilst it is a very difficult industry to crack, it can make dreams come true and I have seen this happen on many occasions.

What do casting directors look for in auditions?

It depends on what the casting director is casting for and the notes we have been given from the director. But mainly we hope that the actors have understood the script and have created their own interpretation of the character. Also, it is really important that the actor can adapt their character at any moment if the director wishes to see something different. We try to collaborate with the actors/actresses in the audition, encourage them to share their visions with us and we can share ours. This is also an opportunity for us to establish a connection with the actor in question to know if we could work well with that person.

What makes a good casting director?

I would say experience of casting, knowledge of the industry and being able to understand the actor’s nerves in the audition.

Does your living location matter? Will it affect the chances of booking certain jobs?

Yes, this can matter, depending again on what we are casting for. If we are casting for a commercial and the actors’ fees are low, and the production are not covering travel or accommodation, then it is unfair to cast actors outside of the filming area. This is because the actor would have to pay a lot of expenses to cover the audition process, travelling to the location etc.

How many people do you usually see for a role?

This depends on the role we are casting for but it could be about 15-20 people for an audition per character. Or, it could be about 5 actors for a drama, soap, film etc. but it varies with each casting director and each production.

Finally, which project has been your favourite to work on?

I would say that the film I am currently casting for is becoming my favourite project. I have been working on the project for over a year and I just love the script and the characters. It is much easier to do my job when I feel really interested in the project. I also loved casting for CBBC and SKY back when I was an assistant.

Thank you for speaking with Making Miss Mogul.

No problem. Hopefully my interview provided your readers with lots of useful information.