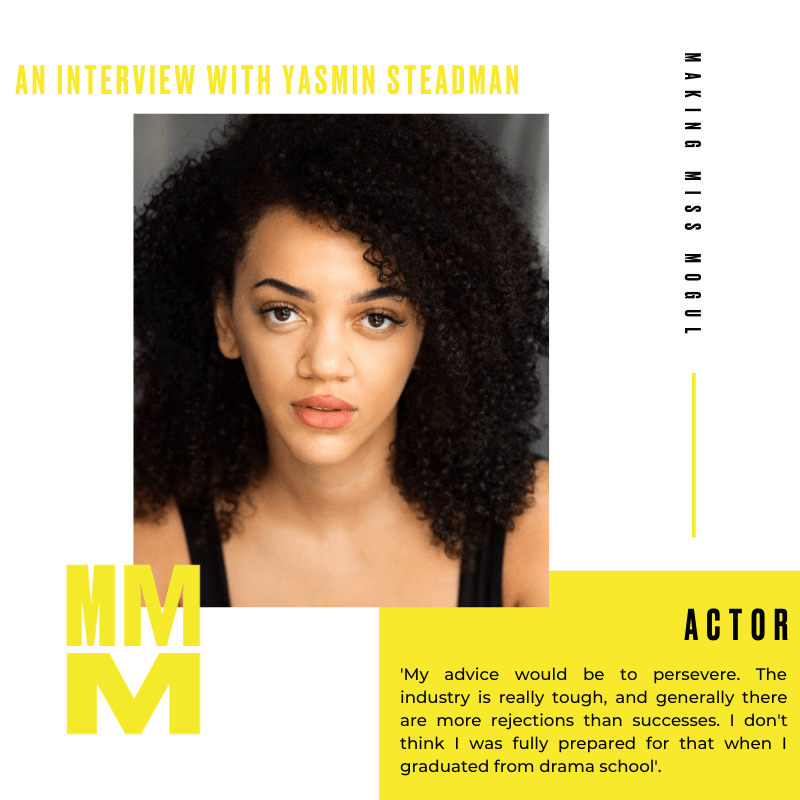 Hi Yasmin, thank you for chatting with Making Miss Mogul. What is your official job title?

I am currently a professional actress.

How did your journey to becoming a professional actress begin?

I signed onto a foundation course at Birmingham Conservatoire. Succeeding that, I auditioned for a lot of different drama schools. Eventually I got into Alra North where I studied BA Acting for three years. Drama school really helped me to sharpen my skills, learn new techniques and hone in on my craft.

Would you recommend drama school to budding actresses?

Although drama school benefited me greatly, I don’t think it is essential for a career in acting. There are other paths you can take such as evening classes and workshops. I have attended many classes since graduating and I even attended one of Jade McCabe’s many courses in my third year of drama school because the final year consisted of mostly shows and rehearsals. Going to the classes helped me to keep on top of my skills and learn new things. However, a lot of actors struggle to get onto Spotlight (a leading casting network). When you graduate from a credible drama school, you are automatically eligible for Spotlight. This is a huge bonus because actors need to have a certain amount of credits to build their Spotlight page. The problem is that you need an agent to get the credits. So without drama school, this can be a vicious cycle which can be hard to break.

How did drama school help you with finding an agent?

Drama school really helped me with finding an agent. The school set up a few showcases in Manchester and invited different agents to come along. I eventually signed with Red Door Management who have been great.

Have you faced any obstacles as a woman in your journey?

To be honest, I haven’t faced many obstacles as a woman in the industry. The industry is gradually becoming more inclusive. There may be more obstacles with BAME actors though, but the industry is slowly growing more diverse which is really positive.

Do you think women are categorized into certain character briefs?

I can definitely see there is the possibility of women being type-cast as certain roles; such as nurses and young mum’s, but there has been some progression in this area too. For example, I played a police officer in Coronation Street earlier this year so it was nice to see them delegating high-status roles to women. Other shows are following suit too; casting women in high-powered roles such as sergeants and business owners.

Can you tell us more about your role on Coronation Street?

Well, I had graduated from drama school and I had taken the next step to get my head shots done. Shortly after, I sent them off to a bunch of different casting directors and it happened to land on the desk of the casting director at Coronation Street. They got in touch with my agent, and they said that I would be suited for a police officer role as and when they needed. Eventually I was called in to audition. They paired us up, and funnily, the guy I was paired with in the audition landed the role of the male police officer which was really nice. The actual filming experience was a lot of fun and I learned a lot from the opportunity.

Have you auditioned for any other shows?

I have done a couple of self-tapes for Hollyoaks, along with auditions for other casting directors and various other shows. Each audition process is slightly different.

What advice would you give to young women eager to step into the world of acting?

My advice would be to persevere. The industry is really tough, and generally there are more rejections than successes. I don’t think I was fully prepared for that when I graduated from drama school. But as time has gone on, I have realised that if a part is right for you, it will all fall into place. I would also suggest networking. In fact, I probably network as much as I practice because it is just so crucial for landing jobs. There is always something you can be doing to move your career forward. For instance, during quarantine, I watched various live Q+A’s and practiced some scripts to keep on top of things.

What do the next ten years look like for you?

In the next ten years I would like to do more television work as I have done a lot of theatre shows. In fact, pre-quarantine I was travelling Italy with a Theatre in Education company. The whole experience was amazing, but understandably it had to be cut short due to the virus. At this point in my career, I’m not fussy about the type of work I receive. However, I would prefer to delve more into television roles etc.

Thank you so much for speaking with us today Yasmin. I’m sure this interview with be extremely useful for our budding actresses out there!

You’re welcome. Thank you for having me.

For more details about the drama school Alra North, check out their website…www.alra/co/uk

If you are looking to book Yasmin, head over to her agent page www.the-reddoor.co.uk