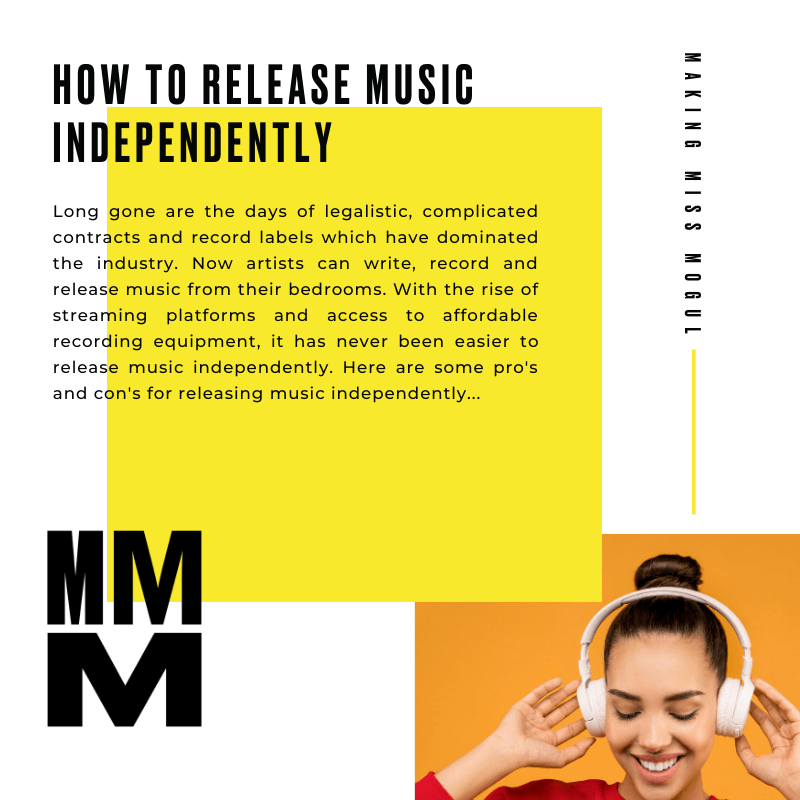 ©Sound On via Canva.com

Long gone are the days of legalistic, complicated contracts and record labels that have dominated the industry. Now artists can write, record and release music from their bedrooms. With the rise of streaming platforms and access to affordable recording equipment, it has never been easier to release music independently. Here are some pro’s and con’s for releasing music independently…

By releasing your own music and paying for studio time, you automatically own the masters to your music. Owning the masters to your music has proven to be very important for artists, yet it is an issue which is often overlooked. Taylor Swift’s famous feud with  former label head Scott Borchetta sparked international debate regarding an artists’ right to own their music. By releasing music independently, this issue is generally dissolved.

Labels often push artists into creating marketable, mainstream music in order to drive sales. It’s all too easy to forget that music is a business and businesses need revenue. Signing with a record label can exasperate feelings of pressure and stress in the pursuit of creating a ‘hit’. Releasing music independently affords you complete control over the art you create and who doesn’t want to create music that they love?

Earning a substantial income from your music will usually prove more difficult if you are self-releasing. This is due to the financial burdens of recording studios, promotion and mastering. Having said that, online streaming has meant that even the biggest musicians in the world are struggling to make money from streaming sales alone. But don’t let this deter you because if independent musicians gig regularly, the music can act as a catalyst for live show and merchandise revenue.

Again, if you lack the financial resources, your music is likely to be heard by less people than if you were signed to a major label. But if you put the time into your promotion, and your music is captivating and unique, there is no reason why you can’t build an audience with little resources.

If you are not currently signed to a label but you are keen to share your music, releasing music independently might be the option for you. It is important to remember that one single release is unlikely to go ‘viral’. Building your audience takes time and patience so don’t be disheartened if the first release doesn’t take off. Release singles regularly and focus most of your energy in building real, true fans. It is much better to have a small, dedicated groups of listeners than a very large group of disinterested listeners.

Not sure where to start? Read our tips below

Presuming your music is mastered, copyrighted and ready for release, the first step is to decide which online distributor you wish to use. The most common include CD Baby, DistroKid, Tunecore and ReverbNation. Online distributors allow artists to send their music to a large number of streaming platforms; usually for a small fee.

The next step is to ensure that you have completed the artwork for your release. If you have the budget, a professional photographer; along with a reputable graphic designer is a sound investment in order to perfectly capture your brand and message. However, if you’re looking at a smaller budget, consider contacting a student. They are most likely looking for clients to add to their portfolio and usually offer a cheaper price. Sometimes, they will even design your artwork free of charge in order to build their CV.

Remember to follow the guidelines with regards to the artwork to avoid a take-down of your release.

Once your request has been processed, you are eligible to apply for Spotify playlists. Being added to a major playlist can do wonders for your statistics and they open you up to new fans. Be aware that you can only log into the Spotify for Artists app once your first song has been released. Thus, only a second release is eligible for playlists. Once you have verified your login for the app, you will be directed to a form. This form will require a description of your track, its genre and other details. Be as specific as you can and be sure to fill in the form 4-6 weeks prior to your release for the best chance of being considered. Don’t be disheartened if you don’t land a playlist. Thousands of tracks are submitted daily. Just keep submitting each release for playlist and you never know!

Lastly, set a release date and get to work on a promotional campaign. There are some fantastic resources online which guide you through various promotional strategies; to implement both before and after the release.To keep track of your release, Apple music and Spotify offer a separate app for artists to closely examine streaming figures, update their biography and provide links to social media accounts. Be sure to optimize these features for a successful release.

Releasing music independently doesn’t have to be a complicated process. Once you have successfully released your first single, each release should become easier. There are no rules. You decide the release date and you create the promotional campaign.

Have fun and good luck!