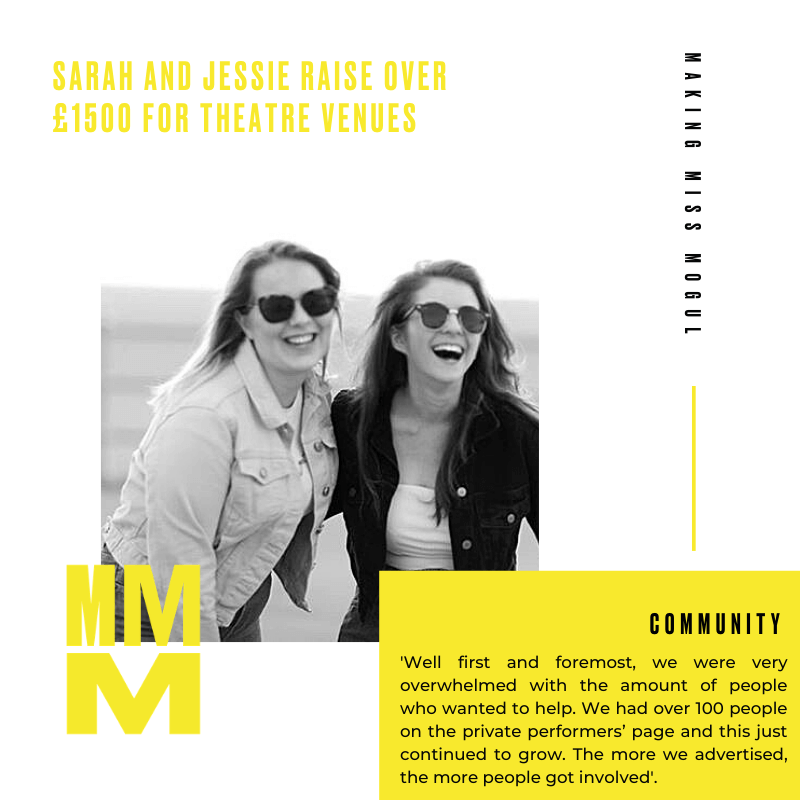 We sat down and spoke with Sarah Louise Donald and Jessie Turton about their fundraising project which raised over £1500 for three theatre venues.

Hi Sarah and Jessie, please could you tell us a little about the project and how it came about?

Sarah: Our project is called ‘All the Worlds a Stage’. It all started when I watched the news and saw that the Globe in London may have to shut down as a result of Coronavirus. So I asked my friends if they wanted to get together to perform a song to raise money. We then thought about raising money for locals theatres too which is how The Grand Theatre and The Dukes came about. 500 videos and 8 weeks later, here we are.

How did the project work?

Sarah: We began with an introductory week online where performers could sing any song they liked. Each week we introduced a theme such as School Week, Shakespeare Week, Fantasy Week, Horror Week, History Week and Showstopper Week. The Classic Day and Song-time Day involved solos, duets, trios, small groups and large groups. These performances were then uploaded to our YouTube channel ‘All the Worlds a Stage Project 2020’ and our Facebook page ‘All the Worlds a Stage’.

How did you recruit performers?

Jess: We reached out by making a private performers group. From there, people volunteered themselves and shared with others.

Sarah: Well first and foremost, we were very overwhelmed with the amount of people who wanted to help. We had over 100 people on the private performers’ page and this just continued to grow. The more we advertised, the more people got involved. Performers were recording songs from their homes in Liverpool, Carlisle and all over the UK. The standard was amazing. We didn’t realize how much talent there was until this project and it was nice to hear songs I’d never heard before.

Jess: There were some fantastic performers who uploaded videos to our page. There were a few standouts for me. I was especially impressed by a young boy called Ethan. He sang a Billy Elliot song with so much enthusiasm. I also thoroughly enjoyed Sophia’s performance. She’s only very young and it was her first time performing live!

Why did you choose the three particular theatres?

Sarah: I have strong connections to The Grand and The Globe especially. My first show at the Grand was in the Alice in the Wonderland Summer School and my first Footlights show was the BFG. When I turned 15, I played the part of princess Jasmine in the pantomime. I also enjoy helping out and I began doing this when I turned 18 by helping the children in the Summer School. With regards to the Globe, I went there when I was about 14 and fell in love with the building. It is pretty much an exact replica of the original Shakespeare Globe. It’s such a beautiful, historical place and all the tourists go there. If it were to shut down, London would lose a lot of tourism.

Jessie: I have a close connection to the Dukes and I work as the Duty Manager there. We began this project before the government announced emergency funding and at the time, there were having to cancel community based shows and the Play in the Park. So we wanted to include them as they are a local theatre as well. The Globe was Sarah’s idea when she brought to my attention that it would possibly be shutting. It’s a classic theatre and we thought it would help us generate some publicity.

How much have you raised?

Do you see a positive future for theatres post-coronavirus?

Sarah: Personally, I think that even though we’ve raised this money, people still need to donate to these venues. Even though we have reached the peak of Covid, the aftermath could be disastrous because theatres aren’t fully open yet. Even when they do people will be cautious of attending.

Jessie – Going forward, I believe it will be difficult for the arts. I currently work for two different arts organisations and it’s proving difficult getting people back into the theatre. Certain steps need to be taken and as Sarah says, despite funding we need to continue to support our theatres.

Did the project help others through coronavirus?

Sarah: We did a few days of live performances and we asked people to tell us what theatre means to them. People were saying that theatre has helped them through tough times and their confidence has grown. Being a theatre teacher myself, I can understand this. My students are happier and less shy after coming to classes.

Thank you Sarah and Jessie for speaking with us.