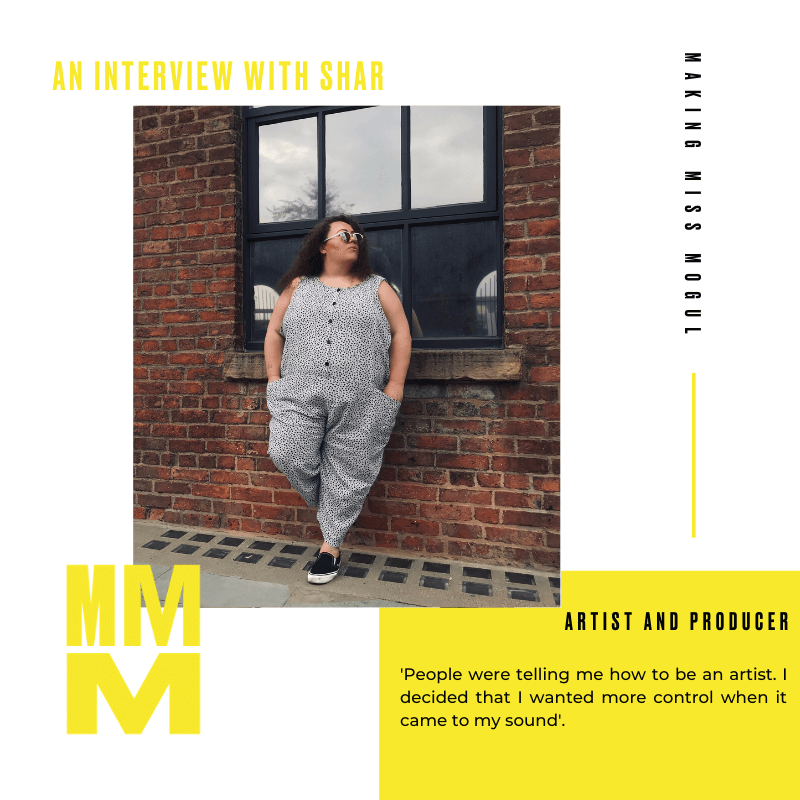 Hi Shar, how did you get into music?

I’ve been writing songs since the age of 8. I started as a singer/songwriter but as time went on, I became interested in production. I felt lost and intimidated when entering the studio environment. People were telling me how to be an artist. I decided that I wanted more control when it came to my sound. I wanted to be able to better communicate my ideas and know exactly what I was talking about. As female artists, It is quite common for us to feel that any question is a ‘stupid’ question. This is just not true, and I wanted to be confident enough to ask questions.

Where did you train?

I completed a three year course in Music Tech at Manchester College. Many people don’t realise that producers are incredibly multi-dimensional. We need to have music knowledge, songwriting skills, engineering ability etc. It’s important to have an understanding of this when you are starting out.

Women currently make up only 2% of producers, how do you feel about this?

I would love to see a well-rounded representation of all identities in the industry. You don’t have to look far to realise that the music industry is dominated by white men. The world is changing though, and so rapidly. So, yes, I would love to see more women in production and more female producers with songs in the charts. Equally, I believe that there isn’t enough representation in the industry in general; whether that be race, sexual orientation, gender or disability. Similarly, if you’re not middle class, then that presents a whole host of other challenges.

Speaking of which, if a budding producer can’t afford music college, are there ways around this?

My advice would be to get involved with your local arts organisation. There are so many around such as More Music in Morecambe and Z-arts in Manchester. They are great because they provide free resources, bring in freelancers to teach and they are an awesome place to network with other creatives. If there isn’t a local arts organisation in your area, note that there is free software online for you to start recording. I am currently working with a group of young people and we are creating an audio, visual film. The equipment we are using is accessible and it just shows that you don’t need a huge set up to create and produce something amazing.

Social media is becoming even more prevalent in building a career. Have you any tips?

I am constantly learning about social media. It’s an ongoing process for me. I think social media is all about being mindful and creating meaningful connections. The harsh reality is that, you can’t just put music out and expect people to care. It’s so crucial to care about the community you wish to engage, in order to get that same engagement back. Without sounding cliche, I am an advocate of being kind on social media. There is so much negativity on the platform, so I like to encourage others.

Have you any predictions for the music industry post-Covid 19?

In all honesty, I am trying not to think about it too much. For a lot of artists, it all seems very bleak to ponder whether the arts may, or may not survive. One thing I am seeing however, is a lot of resilience and energy. I think it’s showed that creativity can’t be kept down; there will always be a demand for it. I’m not sure what the future looks like for the industry. There is so much confusion, and even the leaders don’t know how things will pan out. If there’s one thing I’ve learned, it’s to be patient. Sometimes not knowing is okay, and it’s great to be at peace with that.

You have a new single out called ‘Girl’, can you tell us a little bit about it?

I wrote ‘Girl’ around 1/2 years ago and came back to it in lockdown. The song intertwines identity and forgiveness. Humans are generally unkind to themselves. This song is all about forgiveness of ourselves and, it sounds cliche, but realising that we are all beautiful. We all having a hard time, in many different ways; especially at the moment. The song is also linked to the Black Lives Matter movement. I am mixed race – although I don’t necessarily present as that. I’m just trying to find where I sit in the facets of my identity. The song felt fresh and reflects the current climate so I thought it was a great time to release it.

What’s next for you?

I am currently heading towards an album so I want to release consistently in the lead up to then.

Thank you for speaking with us, Shar!

Thank you for chatting with us.