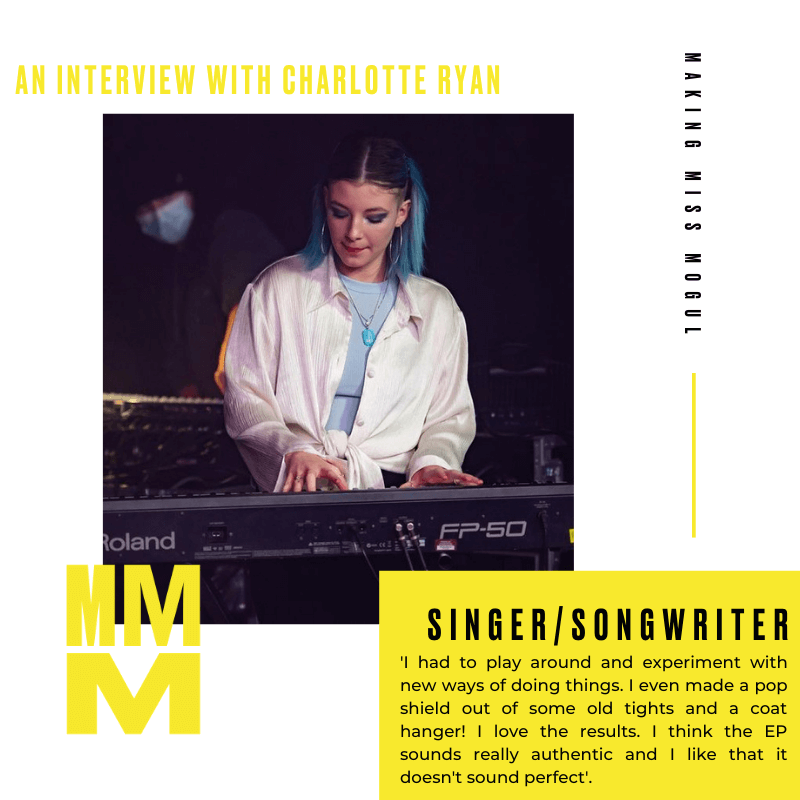 Hi Charlotte, thank you for chatting with Miss Mogul. Can you tell us a little bit about your experience as a singer/songwriter?
I have been singing since primary school where I got involved in all the shows and this carried on through to high school. Having said that, I had always considered music as a hobby because teachers were telling me that music was not a practical career choice. I actually wanted to go into politics, but I changed my mind and decided to take my music seriously. In fact, it was my gig at More Music in Morecambe which made me realize that I wanted to earn a living from music. After singing locally and building up a name for myself, I have enrolled onto a songwriting and performance course at LIPA University to further my career.

You recently released your EP ‘From my bedroom’. Can you tell us a little about it?
Yes, I wrote, produced and mixed the EP all by myself from my bedroom; hence the title. Prior to the project, I had navigated my way around garage band for GCSE but had limited experience. So I researched how to produce my own record by watching different tutorials on YouTube.  I had to play around and experiment with new ways of doing things. I even made a pop shield out of some old tights and a coat hanger! I love the results. I think the EP sounds really authentic and I like that it doesn’t sound perfect.

How have you released your EP?
I used Bandcamp which is a great platform for up-coming indie artists. Artists don’t have to pay for their work to be uploaded to the platform, which if often the case for other distributors such as Spotify and Apple Music. Also, their policies mean that artists are paid a larger percentage of their sales which is so great for smaller, independent artists. My music is now available to stream on Spotify too!

Can you tell us about the Search For A Star competition, run by Victoria Munson?
I found out about the competition through Lucy Reynolds who was one of the judges. I was intrigued by the competition and quickly signed up. After rounds of auditioning, I made it through to the the final 4. It was the first time I have performed as ‘Charlotte’ and it felt like a great first step into the world of music. Although I didn’t win, I am so glad that I entered because it gave me the confidence to perform in front of an audience and I will take the advice with me into future projects.

How did Victoria and Neil aid your artistic development?
Vicky and Neil provided three, three hour workshops for each act in the lead up to the competition. We spoke about song choices, my songs and arrangement suggestions. On the night, I sang two of my original songs on piano and two with a backing track. Neil helped me to produce my own backing track and taught me how to add bass and drums etc.
Vicky and Neil also helped with my image and crafting a brand for myself. It was something I hadn’t thought of until then, but it’s so vital to pay attention to that, as well as the music.

Making Miss Mogul celebrates women’s representation in the music industry. Do you think there are still some challenges?
I think there are still some challenges; for both famous artists and local artists. I have noticed that female artists are expected to reinvent themselves for each new album; whether that be in terms of image or sound. Male artists don’t seem to be met with this expectation. That’s not to say that all male artists don’t shake things up, but it’s definitely expected that female artists need to reinvent more often. Also, I have noticed as a local artist that gig line-ups tend to be male heavy. Most acts are male, and they are typically bands. It’s quite rare to see solo female artists.

Finally, where do you see yourself in ten years?
Hopefully I will still be making music ten years from now and making a living from it. That’s the main goal for me; to earn a wage from my art. I’d also like to have worked with a band by then. That would be so much fun and it would be great to collaborate and write with other artists. I’d like to gain a following and be able to perform in larger venues across the country. Also, I’d love to meet Paul McCartney while I’m studying at LIPA!

Thank you for chatting with us Charlotte!