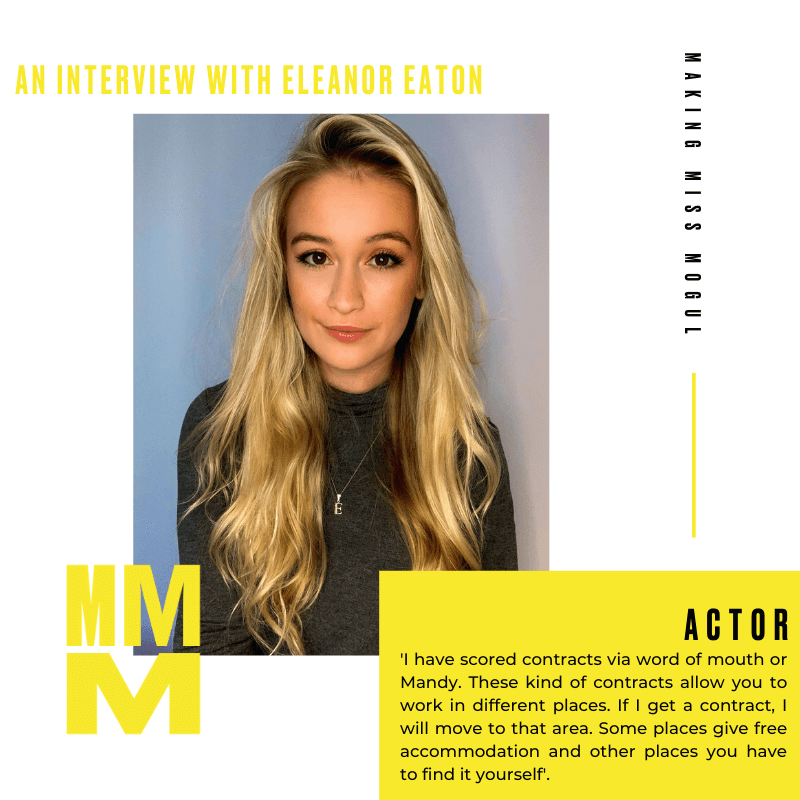 Hi Eleanor, what is your job title?
I am currently a self-employed actor.

Can you tell us a little bit about your experience?
In 2017 I worked at Disneyland Paris as a character and parade performer. My other highlights include touring the USA with a circus company. I gave lessons to children and taught them tricks for two successive seasons. I also worked at the Avon Valley Scream Park as a performer where I played a scary clown and it has to be my favourite acting gig to date because I can really lose myself in the character. I also wrote a musical whilst at University called ‘Nobody Suspects a Murder’ and performed as an elf four times a day for the train to Christmas Town.

Have you had training?
Yes. I began my acting journey at 12 years old in Amateur Dramatics. After completing my A-levels, I attended Bath Spa university and graduated with a 2:1; with one mark off a first. To me, all experience is good experience.

Have you any advice for aspiring actors?
I say go for it! But I suppose it depends on the path you wish to take; success is individual and all goals are unique. I personally wanted the university experience so I auditioned for drama school and chose Bath Spa to pursue my degree. I highly recommend the acting course as it is now an accredited course. We studied film modules, stage combat, Shakespeare, voice, movement and comedy etc.

How do you find the industry as a young woman?
I find that television shows include women consistently; as does the West End. However, theatre shows tend to stereotype women into certain roles such ‘The ‘Mother’ or ‘The young girl’. Plus, the story lines can be quite limited. However, the industry is changing for the better. In fact, the musical Waitress in the West End is written, directed and composed by women!

Do you have any tips for newly graduated actors?
I must admit, universities don’t help much when it comes to life post-university. I would suggest trying to find an agent. Although, I have always found my own jobs so this is definitely possible. Actors need to be signed up to sites such as Mandy, Backstage and Spotlight (if you can afford it). Our tutors didn’t inform us of these sites so I had to navigate this on my own. I also think it’s okay to do free work so long as you get something out of it.
Have you faced any challenges as an actor?
The biggest challenge to overcome as an actor is rejection and feeling inadequate. The truth is, parts are hard to come by and getting in the room to audition is half the battle. Also, you are more likely to book roles suited to your typecast. There are limited parts and so many people going for them. In reality, it is usually 1 in every 1000 who books a role. Whilst that sounds very bleak, it is important to keep striving for parts. The more you do, the more chance you have of booking a job. You could even write your own scripts or find writers to curate parts with you in mind. For example, Daisy May Cooper wrote her own show and starred in it.

What skills do actors need to possess?
I would say charisma, confidence, acting ability and resilience. If you want to be an actor, go for it. Help yourself out and network with other creatives.

How can actors travel whilst acting?
I have scored contracts via word of mouth or Mandy. These kind of contracts allow you to work in different places. If I get a contract, I will move to that area. Some places give free accommodation and other places you have to find it yourself. For example, I had to find my own accommodation in Bristol for the Scare Festival. I need to be flexible and be able to move. You can’t realistically book hotels for the length of a contract.

How can other actors perform at Disneyland?
To apply for Disney, keep an eye on the Disney website or Star Now. There are two or three rounds of auditions on the day. One of which is an animations workshop to check how capable you are at portraying characters. If you engage them via the first round, you proceed to the dance round which is where the professional dancers thrive. From here, they narrow down again to the ‘face’ audition. Here, you are lined up, and they will evaluate whether your face matches a specific character. If not, they might work out what else you would be suitable for. It’s all about your height, confidence, ability to move and facial expressions.

Thank you for chatting with us Eleanor. 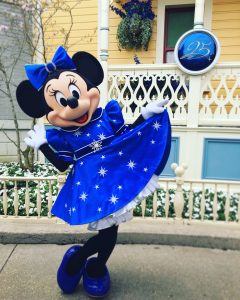 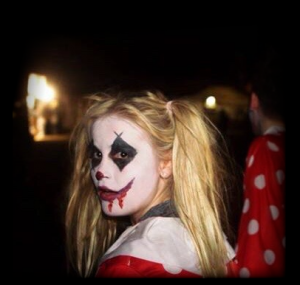