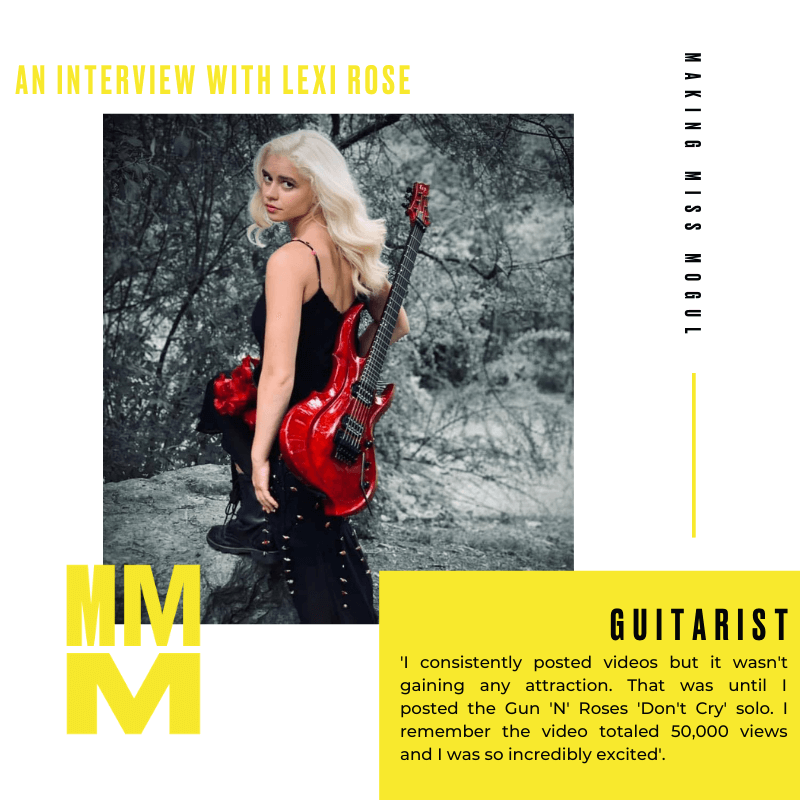 Hi Lexi, when did you start playing guitar?

I began playing guitar in September 2018 and have been playing for around two years now. My aunt started taking me concerts when I was about 15 and I remember she took me to a Kings of Leon concert. I loved the rush of the band and watching the guitarists do their thing. She also took me to a bunch of other festivals following that and it really inspired me to pick up the guitar. Growing up I admired many classic rocks bands such as Guns ‘N’ Roses and Slash so they were huge influences too.

You have amassed over 60,000 followers on Instagram! How did you manage to achieve this?

Well, I had been watching all of these incredible guitarists on YouTube and Instagram; specifically Cole Roland and Tina S. They inspired me to make my own guitar videos and I tried to emulate what they were doing initially. At the time, I had only just started playing the guitar, so I made a progress page to see where I could take it. I consistently posted videos but it wasn’t gaining any attraction. That was until I posted the Gun ‘N’ Roses ‘Don’t Cry’ solo. I remember the video totaled 50,000 views and I was so incredibly excited! It was incredibly exciting so I continued to post frequently.

How can other guitarists build a following online?

I think posting consistently is the most effective way to build a following. Play around with different hashtags, look into your insights for data about engagement and most importantly, love what you are doing. People will want to follow your journey when you are super passionate about what you do.

What kind of music do you listen to?

I listen to a variety of music; rock, pop, metal, country, blues etc. When I first started out Slash was a huge inspiration, along with Marty Friedman, Nita Strauss and Tina S. Particularly Tina as she is so young, yet so talented.

What’s it like being a female guitarist when there are so little of them?

There are definitely some struggles being a female guitarist; especially because it really is a male dominated industry. A lot of people are very supportive, but there are lots of people who aren’t into it. Sometimes there’s the stigma that, you’re a girl so this is why you have a big following or ‘you’re pretty so that’s why you have a following’. But no one else’s opinion should matter if playing guitar is what makes you happy.

Go for it. Share that passion and let it shine through in your videos. Don’t let anyone’s opinions distract you from what you’re doing and where you are going.

Making Miss Mogul celebrates the music industry for its inclusivity in recent times. Would you agree this is the case with guitarists?

Yes, I think we’re definitely seeing a surge of female guitarists. There are so many bad-ass players emerging and it’s really starting to diversify.

Have you played with a band before?

I haven’t had the chance to perform with a band yet. Unfortunately, with Covid, a lot of things have been postponed. I’m currently working on my album though, so hopefully in the near future, when things start to return to normal, I can get back out there and start playing some shows.

What has been your biggest highlight so far?

My biggest highlight was the my first viral video. Even though I’ve had other videos that have outperformed it, it was that initial buzz that was so exciting; almost like a breakthrough. It gave me the confidence to continue, and it think it was one of the best moments that I’ve had.

How has the coronavirus pandemic impacted on your career?

Well I was planning on starting a band but Covid put an end to all of that for now. I have been really inspired to make music though. I’ve been learning to mix and produce over lockdown so that’s been great. Despite the craziness, I have been making the most of it and being creative.

Thank you for chatting with us Lexi.