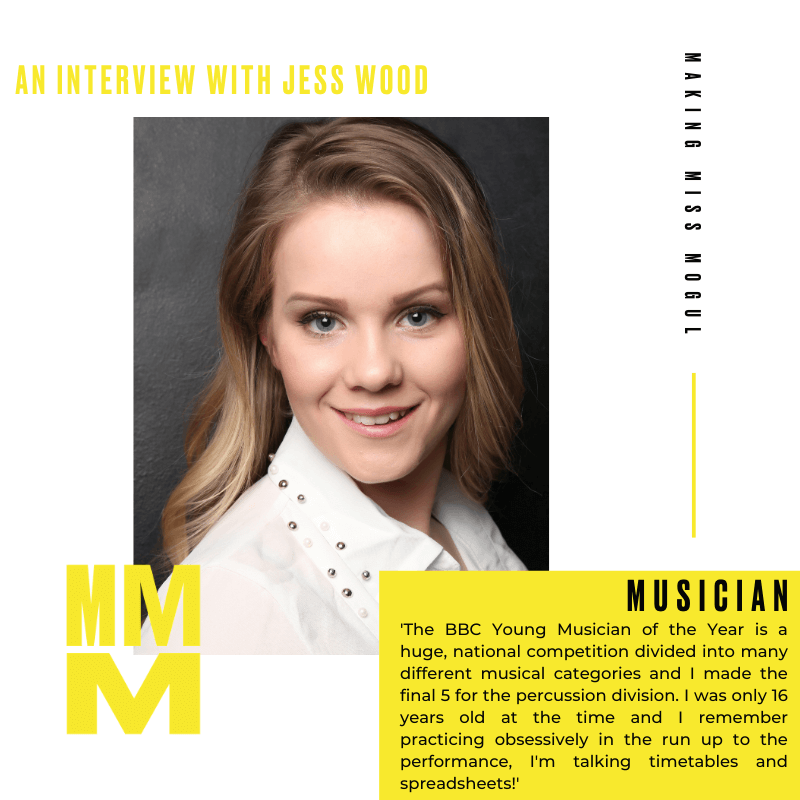 Hi Jess, what is your profession?

I am a freelance musician. My work is mostly in the West End and I also teach children how to play piano and drums.

What inspired you to get into music?

Growing up, my parents owned a music shop so I was constantly exposed to music and musical instruments. My brother Harrison is very musical too and watching him play influenced me a great deal. I also remember being a young girl and begging my Mum to take me to piano lessons and her finally caving in.

When did you decide to take music seriously?

My brother was a student at the Junior Royal Northern College of Music and I went to visit him on an open day. As I was walking around, I saw a long line of marching drummers with light up sticks! I remember thinking it was so cool and prodding my Mum to tell her that I wanted to attend the college too. I was only about 10 years old at the time but we scheduled an audition and my instrument of choice was the drums. I was accepted into the school but there was a catch – they didn’t actually teach the drums. They only taught percussion and I didn’t even know what percussion was so the teacher gave me a little tour. I stayed there until I was 18 having attended class every single Saturday. I learned musicianship, theory, timing and got to regularly play in ensembles and trios. Music was really the only thing I truly loved and I had started to win competitions and advance quite quickly. I soon learned that music was a possibility for me and that motivated me to continue on that trajectory.

Did you go to music college after A-levels?

Yes, I attended the Royal College of Music in London for four years before graduating. I had to audition with set pieces on different instruments and apply via CUCAS. I think it helped that I had attended their weekly classes in Manchester but anyone with music skills can apply for the college after 6th form.

In 2014, you made the finals of BBC Young Musician of the Year (percussion). Can you tell us a little more about it?

The BBC Young Musician of the Year is a huge, national competition divided into many different musical categories and I made the final 5 for the percussion division. I was only 16 years old at the time and I remember practicing obsessively in the run up to the performance, I’m talking timetables and spreadsheets! It was such a daunting experience being so young and having a film company come to my house to interview me but it was even more daunting performing my piece live on national television. We could only perform the piece once for the judges so it was pretty nerve-wracking.

Was it difficult to find work after graduation?

Whilst attending college, I networked and socialised with lots of industry people. Strangely, when I was attending my brothers wedding in Cyprus, I met his friend Jon who is a conductor for Magic at the Musicals hosted at the London Palladium. He knew I wanted to get into music professionally so he visited my college and conducted a few tests. From there, he mentioned my name to Chris Marshall who was doing Elf in the West End at the time. Through that I started work on Magic at the Musicals and that’s where I met Sylvia Addison. She is one of the 4/5 West End ‘fixers’. I remember driving in my car with 0 miles left in the tank and receiving a call from Sylvia. It was such an adrenaline rush for both of those scenarios to be playing out at the same time! She asked if I wanted to join Joseph at the London Palladium as the percussion chair holder. I couldn’t believe it! As you can see, it was a real process of networking and one job leading to the other. It’s so important to give your best at every job because your name can be passed around and be recommended for future shows.

What are your opinions on gender equality in music?

I recently read an article which stated that there are more people called Dave who occupy a percussion chair in London Orchestras than women! I personally know only one female who holds this position. I think we’re in a strange transitional period at the moment when it comes to equality because there are many factors at play. Are men simply better at percussion? Do men find playing the drums more appealing than women? Are women less interested or less confident and is the ratio between men and women in percussion even an issue? It’s funny because I’d never really thought about it until reading that article. Although, in the past I have been recommended for a job because I was a woman. It’s a difficult one because I doubted my merit and whether I was only there because of my gender. I think it’s great to amplify females in the industry but it’s a difficult subject and it’s hard to know how best to broach it.

How did coronavirus impact your industry?

Well, one day I was working on Back to the Future at the Opera House and then I woke up the next day and there was no work for a whole year! Unfortunately, I didn’t qualify for any financial support as I had savings. If you have more than a certain amount, you cannot claim assistance. But things are looking up now and without the pandemic, I wouldn’t have been able to create new songs or collaborate with amazing artists because we were all too busy beforehand. We definitely won’t take performing for granted either.

What is your advice for anyone wanting to follow in your footsteps?

Say yes to everything – even if it’s unpaid! I know it’s a tricky subject because musicians should be paid but you never know where an experience will lead you. Also, if the opportunity arises, socialize with cast and crew after a show and forge as many connections as you can. 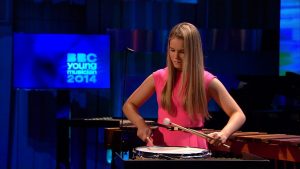