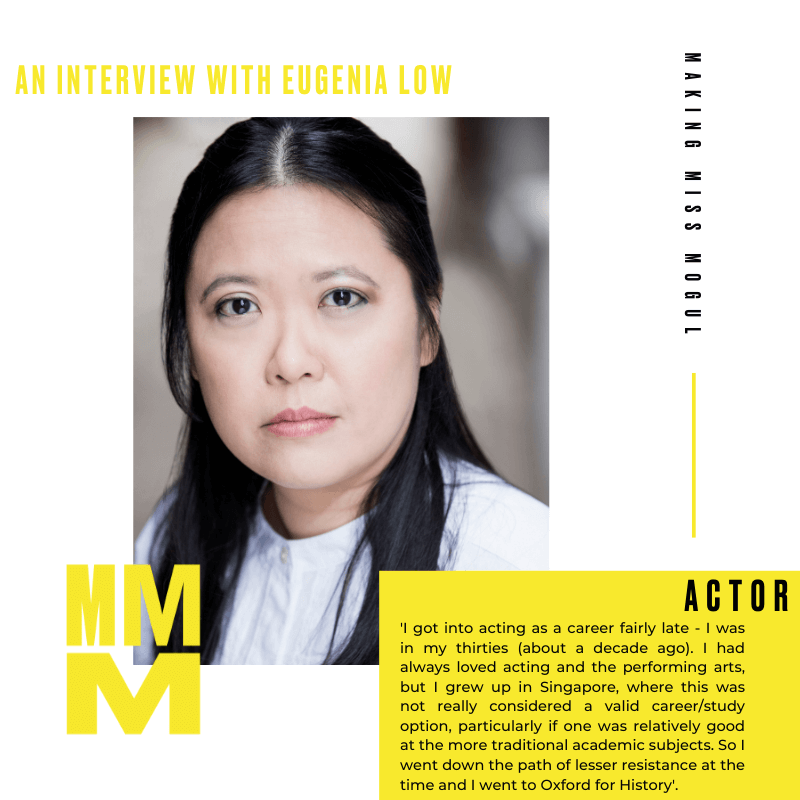 Hi Eugenia, what is your occupation?

I’m an actor, but I also work Front of House at an arts centre (Barbican) when I’m not acting.

How did you begin your journey as an actor?

I got into acting as a career fairly late – I was in my thirties (about a decade ago). I had always loved acting and the performing arts, but I grew up in Singapore, where this was not really considered a valid career/study option, particularly if one was relatively good at the more traditional academic subjects. So I went down the path of lesser resistance at the time and I went to Oxford for History. I then went on to do a Doctorate in History with a view to becoming an academic, but that didn’t pan out, so I did a Law conversion course and ended up practicing as a corporate lawyer for about 7 years. I started reconsidering acting as a career after a cataclysmic change in my personal life (the sudden end of a long-term relationship) and combined acting and stage combat evening classes with my day job for a couple of years. This period of time dovetailed with the 2008 financial crash, which made me question the acceptability of my corporate career from an ethical perspective. Basically, I found myself morally unable to continue crafting corporate tax schemes for major financial institutions to help them avoid tax/use the international tax structures for financial gain to the detriment of the populations who were being subjected to austerity, and I just had to get out of the corporate world for my own ethical wellbeing. Long story, but that’s how I became the freelance actor that I am now, supplementing my income with a zero-hour survival job at the Barbican.

Did you find the acting classes beneficial?

I didn’t go down the traditional drama school route for a variety of reasons but I did take acting classes. I did 2 years part time at the City Lit (adult education) and then went to the Actors Temple for studio-based full training in the Meisner technique. I would definitely recommend doing classes, and continuously developing your craft. The Meisner technique unlocked a lot for me and is my go-to “method” or technique. It’s not everyone’s cup of tea, but ultimately you find what works for you – what enables you to connect authentically with the material you are given, what clicks for you, what makes you better understand your own inner workings and thought processes and how that relates to the role you are being asked to play.

How has the coronavirus pandemic challenged theatre work?

Well, traditional theatre work basically disappeared overnight and there was certainly a LOT of anxiety around being able to survive with no work, so that was certainly challenging. However, while the big commercial theatre owners saw doom and gloom, what has been amazing has been the ability of smaller/emerging theatre makers to innovate with the creation of live-streamed theatre using the medium of Zoom, with actors performing from their individual homes and connecting over the Zoom platform. Pivoting towards this medium of performance has kept me going during the pandemic and I definitely got to play roles that I would never have been ‘allowed’ to pre-pandemic, learnt a bunch of new skills and got to work with a range of actors from across the globe that I would never have encountered if the industry had carried on as before.

Speaking of the pandemic, did you take up any new hobbies during the lockdowns?

I didn’t take up anything new, unless you count learning to craft makeshift props and costume from household items for Zoom performances as a new hobby! The hobby/skill of MacGyver-ing, perhaps?

Which has been your favourite role to play?

I don’t think I can pick just a single favourite! I kinda have a few favourites for different reasons. I absolutely loved playing R2D2 for The Show Must Go Online’s ‘William Shakespeare’s Star Wars’ by Ian Doescher because as a Star Wars fan and a Shakespeare geek how could I not? On a more serious note though, I also got to play Shakespeare’s Richard II for Shakescene Shakespeare over Zoom during the lockdown and, in terms of an acting challenge with a character of emotional extremes and one that I find most fascinating, this is definitely a strong contender for my favourite role.

What draws you to Shakespeare’s work in particular?

The depth of his understanding of the human condition, the way he manages to direct actors from within the text through the manipulation of language, the way he can evoke emotion just from the speaking of the words as written (through practical things like the sounds in the words, the articulation required, etc)… I just find his work endlessly fascinating on so many levels!

Does knowledge of history help with character development when performing period dramas?

Oxford was my first immersive experience of being in England at the age of 18 so a lot of what might be regarded as quirky and elitist practices, I just saw as part of life in England. It was an intense experience and it was my ‘coming of age’ place, so it will always be special. Looking back, however, I see how far removed from everyday life in the UK the experience was and I kind of took being around very intellectual people all of the time rather for granted at the time.

Do you write or direct at all?

I write sporadically, but definitely not consistently enough to claim to be a writer. I also don’t see myself as a director as I do not feel able to direct other people. However, I have theoretically directed myself on a theatrical short film. I had the vision for the film, which I guess counts as directorial, but it’s not a mantle that I currently seek.

Have you any advice for those wanting to get into theatre work?

Develop a love for the craft of performing or theatre making and a good sense of respect for the work that everyone puts in (including yourself). Career highs and lows are often fleeting, but if you love the craft, that is a constant you can hold on to regardless, for the most part, of what you’re going through.

Watch as much theatre as possible and engage critically with what you see – what is it about the work that you connected with, or didn’t, and why – so you gradually work out what kind of artist you want to be in your own work as a performer or theatre maker.

What are your hopes for the future?

I hope for a more open and equitable industry for theatre, the representation of a wider range of voices and perspectives and greater diversity and inclusiveness. For myself, I just hope to be a part of that future! 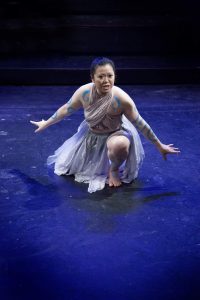 Eugenia as Ariel in the Tempest
Photo by Nikki Leigh Scott