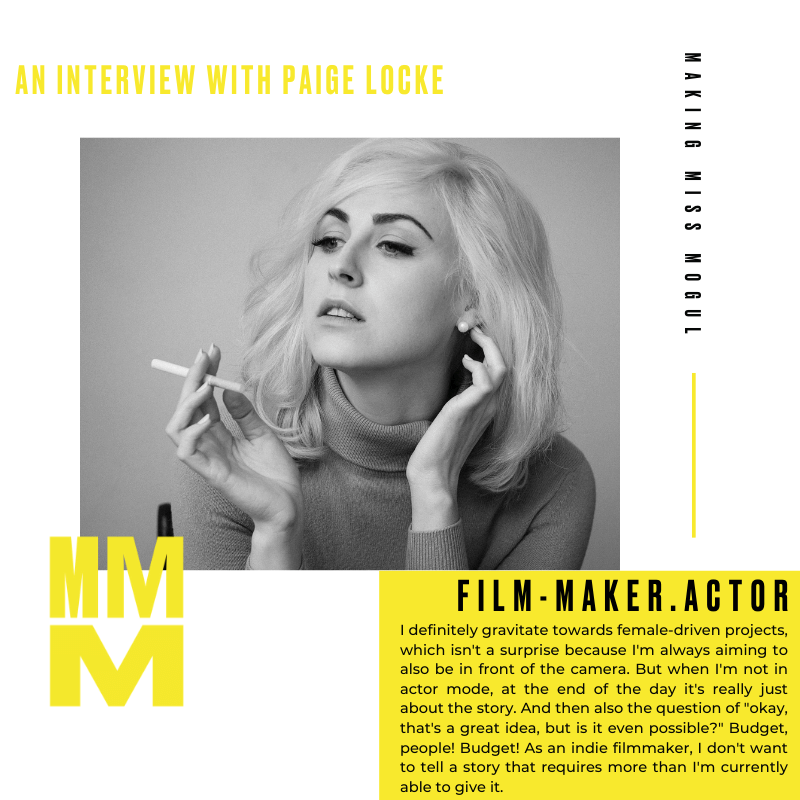 Hi Paige, what is your occupation?

I am an actor, producer and writer.

How did you begin your journey into acting/film-making?

I have been pursuing acting the past 10 years! Essentially since finishing college. I began producing my own films in 2018 as a way to make myself work. Unless you’re lucky enough to get that big break early on, typically I think a lot of us get to a point where we realize we need to be more proactive with our career. I also love the hands-on element of being behind the camera, getting to craft the whole picture. As an actor, when your job’s done, you get shuttled away… that’s no fun.

Where did you study?

I received a Diploma in Musical Theatre from St. Clair College in Windsor, ON, a Bachelor of Performing Arts degree from Capilano University in Vancouver, and I majored in Painting & Drawing at OCAD University in Toronto, ON (before becoming an art school dropout to pursue acting…)

You executive produced and starred in the Misfit M short movie in 2019, can you tell us a little about the storyline?

Misfit M. documents four days of Marilyn Monroe’s life in 1961 in which she was unwillingly and unknowingly admitted to the psychiatric ward of a New York hospital. Shortly after, she wrote a letter to her trusted psychiatrist (not the one who had her admitted), retelling the experience. My producer, Allie Dunbar and I, secured the rights to said letter with the help of an auction house in Los Angeles. I spent a few months adapting the letter into a screenplay while still maintaining the integrity of all her writing, so Misfit M. is literally written by Marilyn. I had actually recited the letter as one large monologue in a one woman show simply titled Misfit throughout the summers of 2016 and 2017, but it needed some tweaking for film. I fell into that theatre production by just replying to an ad online looking for someone to play Marilyn. I didn’t realize it was a one woman show until I showed up to the first day of rehearsal and it was just the director, Darren Stewart-Jones, and myself! I also played Marilyn in a commercial for the Toronto International Film Festival… it’s been a lot of the lady. I’m giving her a break now. I will say though, after years of getting to know her, I genuinely love her and I really wasn’t much of a fan before all of this. She’s so layered and so captivating. There’s a lot going on there.

The film was screened at a film festival in LA. Tell us more!

Yes! The film had its world premiere at the Lady Filmmakers Festival in Beverly Hills in September of 2019! 21 acceptances later, it’s about to wrap up its very long festival season (thanks to COVID postponements) back in Los Angeles this July with LA Shorts, our first Oscar-Qualifying festival. It’s been a ride. I initially was hoping for just five festival appearances, so we all feel very lucky. It was awarded Best Canadian Film, Best Experimental Film and Best Cinematography from the Canadian Cinematography Awards, as well as Best Cinematography from Chelsea Film Festival in NYC (shoutout to cinematographer/co-director/editor Austin Ball!). Traveling to LA for the premiere was amazing. Allie Dunbar and our production designer Angelica Stirpe joined me. We had the best week.

Could you tell us about more of your work?

As an actor I’ve appeared in FX’s What We Do in the Shadows and CTV’s Carter. I’ve also produced a few other shorts under the umbrella of my production company, Lockeport Productions, and am in the early days of developing a comedy series I’ve written. We’ll see! Since March 2021 I’ve been working behind-the-camera on four MOW’s. July’s the perfect month to film a Christmas movie! So much fake snow.

Have you a particular style you gravitate towards when making films?

I definitely gravitate towards female-driven projects, which isn’t a surprise because I’m always aiming to also be in front of the camera. But when I’m not in actor mode, at the end of the day it’s really just about the story. And then also the question of “okay, that’s a great idea, but is it even possible?” Budget, people! Budget! As an indie filmmaker, I don’t want to tell a story that requires more than I’m currently able to give it. I see what I have to work with, and then want to tell a story that I can do justice. I never want to put even $100 into something that my parents will just pat me on the back for. Producing takes a lot of time and energy and if I invest money in a project, ask people to come onto said project, then it better be good enough to be seen by more than my immediate circle. Saying that, everyone should create for fun. You learn so much. You just get to a point where you want your efforts to move your career forward. But sometimes you meet a person or have an experience that can open doors by just being on a set, working hard and mingling. So don’t listen to me. Just keep moving forward, is my only advice.

I wish I had started producing earlier and I wish I had hopped onto the crew side of things years ago. I was just an actor pursuing acting and working in a restaurant for far too long (though I do admit I love the service industry). Do whatever makes you feel good, but I would stress not only doing one thing. We’re six months into 2021 and I’ve been an actor, the Key PA and Locations Manager on both shorts and features and wrote a pilot. Mix it up. Get more skills. It can only lead to more work and hey, being on a set is being on a set. Network your arse off. And be kind, leave your worries at home. If you’re having a bad day, just go and vent to the crew rep. No one likes a set gossip. Or a Mr. Grumpy. People will remember the person who made set a light, fun place and that’s who they’ll want to bring back (assuming you also work hard).

How has the pandemic affected your industry?

The film industry, luckily, for the most part has powered through. ACTRA, the Canadian union for actors, put a plan in motion so that filming could continue. Many rules and lots of testing but it’s been manageable. It was a learning curve doing all my audition tapes from home on Zoom, that’s for sure. To overcome relying on the government to pay my rent, in February I replied to an ad online looking to fill out their team and the rest is history… four features later. Because I produce my own films, I felt I knew enough to hop on board a project with a bunch of strangers and stay afloat, but I didn’t really know much about how a set functions. As a producer, my experience had been a lot of hiring and delegating and overseeing… but being one with the crew has been awesome. And I truly, sincerely love driving the trucks. I do. If you feel yourself getting restless, just dive into a project, reply to job postings. If the film industry is truly your calling, you’ll figure it out. 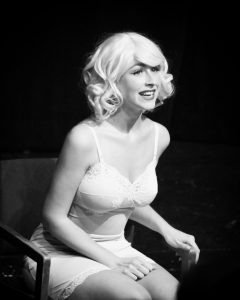